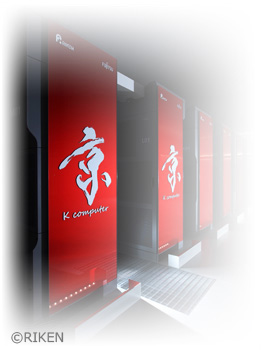 In climate research area, the simulation has become one of the most vital technique as well as theory and observation. Since the IPCC started to report environmental assessment in 1990s and tackled to the global warming issue, many future climate projections by various climate models have been performed. However, from restrictions of computer resources, the reliability issue of models still remains and the climate model do not become in the mature stage now. In this research team, a pioneering research, which suggests the direction of future climate simulation, will be conducted. In order to raise the reliability of climate model more than the current status, we aims to construct a climate model based on more theoretically physical principles. Such a model needs tremendously large computer resources. Therefore, it is necessary to design the model to pull out the capability of computers as much as possible. Recent development of supercomputers has a remarkable progress, however, new numerical techniques may be needed under the collaboration of hardware research and software engineering for effective use of them on the future HPC. In addition, for better understanding and the more reliable assessment of the climate, if the research style is closed just in the climate research community, the breakthrough in this area has a limitation. For the above research achievement, our team is cooperating with the computational scientists in other fields and computer scientists. We enhance the research and development including the effective technique and make a next-generation climate model. Although establishment of the above-mentioned basic and infrastructual research is aimed on K Computer now, our team essentially directs to the research and development from a viewpoint based on the R&D trend of future HPC. Namely, this research leads to post K computer or subsequent ones. We believe strongly that such research can contribute to other science fields.